Warzycha commented on his decision to play Josh Williams over Nemanja Vukovic, it comes down to discipline.

There has been one consistently puzzling lineup choice in the Crew first XI. Josh Williams has apparently locked down the left back spot over Nemanja Vukovic. Robert Warzycha finally cleared up the reasoning behind this choice yesterday morning at training to the Dispatch's Adam Jardy. It comes down to discipline.

That can mean quite a few things. It could be positional discipline or the ability to follow instruction exactly. Whatever it is, Williams has it over Vukovic. Williams has cemented the left back spot aside from his red card offense in Philadelphia late last month keeping him out of the Montreal and New England games.

Both players have put in good shifts at left back. Vukovic has played some very solid defense while springing into attack and lashing in left footed crosses. Williams is a constant threat on set pieces and is adapting to a new position quickly. He's naturally right footed so he'll cut in more often, opening up a little more space on the left.

This debate isn't to say that Josh Williams deserves to see the bench, far from it. He's likely the second best centerback on the team this year. He can use his physicality and athleticism dominate opposing forwards. At left back, his instincts are still developing and he is slow to see some plays develop and can get caught out of position. The Crew's best XI includes Williams, it just should have him paired with Marshall.

Vukovic's numbers are comparable to Williams and their heat maps from Opta look quite similar. Here is Josh Williams against New England at home and Nemanja Vukovic against Montreal at home. 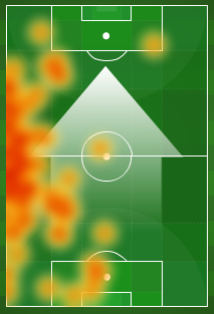 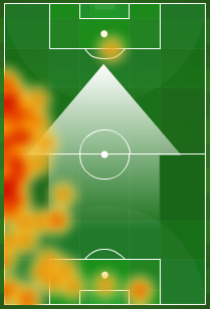 Both show players who are consistently playing close to the touchline but push forward into the offensive third. All of the other heat maps show the same, little difference between the two players. The passing distribution charts are likewise very close. There is little statistically that Opta tracks that can differentiate the two. This decision comes down to the coach and what he sees in practice every day.

That's the crux of the issue. Warzycha sees a Williams, Julius James (or Carlos Mendes) back line is better than a Vukovic, Williams back line. It's a coaches decision and one that leaves fans and blogging pundits like myself just a litte confused.