Columbus takes great pride in being the unofficial home stadium of the U.S. National Team. Crew President Mark McCullers talks about "Dos a Cero" with pride. The supporters groups in town painstakingly roll out the red carpet for traveling U.S. supporters, making sure that everyone has a good time.

Crew Stadium is nowhere near the crown jewel of American soccer stadia anymore. Home Depot Center passed it in 2003. PPL Park and Red Bull Arena took the stadium game to the next level. LiveStrong Park in Sporting Kansas City again raised the bar. Additionally, unlike stadiums on the coast, it has the demographic makeup to be a serious contender for National Team duty.

This is unsettling for local soccer cognoscenti. U.S. v. Mexico at Crew Stadium is tradition. Three times El Tri have headed north to take on the Yanks and three times they left with a 2-0 loss. The U.S. have a +12 goal differential at Crew Stadium. They have won four qualifiers in the cozy confines of Hunt Park. That's real history.

LiveStrong Park in Kansas City has only hosted a Gold Cup game, a capacity crowd watched the U.S. ease by Guadalupe. It was a fine display by Kansas City and the venue is top notch. Certainly the Federation could see it a viable option to head further to middle of the country and find a new home for the Americans.

As it turns out, both cities are hosting games this round of qualifying. Yesterday's Jamaica game certainly exploded in importance when the U.S. suffered a shock defeat last Friday. Kansas City hosts the National Team in October when they face the ever tricky Guatemalan squad.

So with extra pressure of city pride on the line, the Columbus soccer community swung into action. The game was a quick seller in July and the Federation brought in extra seats, something they normally do for the Mexico game. Those sold too, making this the 5th U.S. game to sell out in Stadium history.

The 4,000 plus that came out to training on Sunday were the warning for the storm of energy that would be arriving Tuesday night. The players did regeneration work, jogging, stretching, and the like. It didn't matter. The crowds came anyway.

Crew Supporters Union, Hudson Street Hooligans, and the American Outlaws had long kicked into action to be the hosts with the most. Local pre game festivities have a long history, going back to O'Shaughnessy's and Claddagh in years past to 4th Street Bar this year.

The result was a massive tailgate with beer, food, soccer on a portable big screen, and a mass of humanity getting pumped for the game. Familiar faces meshed with those coming from out of town. There was a ever growing buzzing of excitement of being part of something big as the afternoon turned into evening. 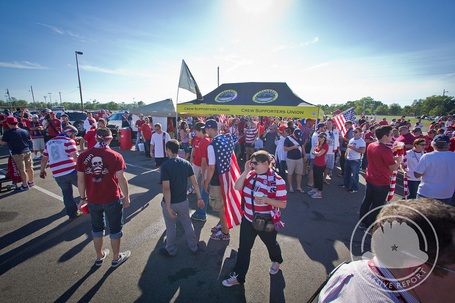 The first massive roar erupted before the game was near kickoff as the players entered the field. The American Outlaws spread the American flag tifo across their sections. Everyone filling the concourses had a flag in hand. The few Jamaican fans would get a little good natured ribbing. That buzz from earlier was building into something truly electric.

Nearly 24,000 backed up Columbus native Josh Krajick as he turned in a fine rendition of the Star Spangled Banner. The crowd, some had been waiting weeks for this moment, erupted for the opening whistle. The roars would only get louder for every opening offensive foray, crescendoing for Gram Zusi's 6th minute crossbar scraping shot.

Jamaican goalkeeper Dwayne Miller thwarted chance after chance in the first half as the U.S. attacked the North End, home of the diehard American supporters. Every attacking move, blocked, tipped, or clipped in every imaginable way. Even heading into halftime improbably tied wouldn't douse the drive of the U.S. or snuff out the energized crowd.

The American breakthrough did eventually come by way of a Hercules Gomez free kick and every pent up emotion came boiling over. Gomez, ecstatic, pulled at the badge on his jersey as he was mobbed by his teammates. 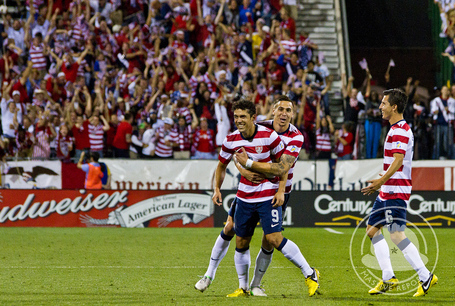 And the fans who finally had something to really cheer about... they did. It was a roar that could be heard throughout the parking lot and beyond. Everything that the Americans had needed came together and they were headed towards a much needed win, buoyed by perhaps the loudest fiercely pro-American crowd to watch a qualifier.

Well done, Columbus. We see you.

Yes, the U.S. did lock in three points, but even the massive win was a little overshadowed by the immense support that the team got, that great crowd that was 100% behind them.

After the game, nearly everyone talked about it as an eventuality that U.S. v. Mexico will be back at Crew Stadium 2013. Any doubt from the locals had evaporated. Head Coach Jurgen Klinsmann opened his comments by thanking Columbus. The story was the same from the out of town media. Many couldn't remember a game with a more powerful impact from the stands. Yes, this includes prior U.S. v. Mexico matches.

My #USMNT match analysis and player ratings for the NYT. Includes a rare 10.goal.blogs.nytimes.com/2012/09/12/pla…

After some rough years off the field, the Crew are reestablishing that Columbus is a soccer town among the local and national consciousness. Yesterday's game, that crowd did the same thing in 90 minutes.

Crew Stadium is the center of the American soccer universe tonight.

I'm betting that Columbus will once again be at the center of the American soccer Universe within a year.

USA still undefeated at Crew Stadium! USA - when you need 3, come home to Crew Stadium - we will deliver! twitter.com/CrewPrez/statu…