HA HA, you all thought I forgot about this, didn't you? Na, I was actually fairly frustrated with the last home result, not the performance, that I decided to refrain from writing a post due to the possibility of it consisting of a lot of profanity. 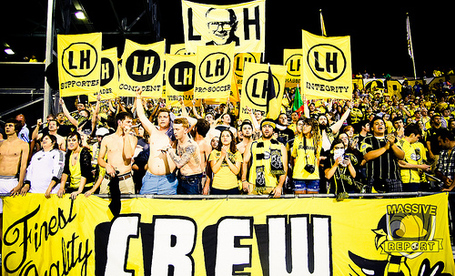 The Crew took on FC Dallas for the "Pioneer Cup". The two teams remain the only standing Major League Soccer clubs still owned and operated by the same entity in Hunt's Sports Group. The "Pioneer Cup" was created as a means of honoring Lamar Hunt, the founder of both clubs and a key figure in the American soccer landscape and American sports in general.

Crew supporters in section 139 kicked off the festivities with a fantastic display honoring Lamar Hunt's legacy by raising two-stick banners baring his initials, image and words that people have used to describe him.

The festivities on the field were much of the same that we have seen the last few games from the Crew. Lots of pressure from the home team with NOTHING to show for it. However, there were some glances of scoring chances, but still, no one capable of putting those chances within the frames of the goal. The Crew's attacking core took another hit as Ethan Finlay went down after taking an elbow to the head. Within a few minutes, Justin Meram would take Finlay's place at forward with Emilio Renteria. Hey, look, we have a few more offensive sparks. The ball is starting to get closer to the frame.

The Crew enter the locker room for the half down 1-0.

The Crew come out swinging in the second half and so does Dallas. Except that Dallas came out swinging elbows, arms and feet. Dallas players were seeing how far they can foul Crew players until Zach Lloyd proceeded to use his elbow to stop Meram from reaching the ball, quickly earning him a second yellow and and a chance to shower all by himself.

The Crew waste no time in FINALLY making things right, and it came from the least expected places. Dallas is trying to clear the ball out of it's half of the field when it is met by the defensive wall of Eric Gehrig. The returning ball finds Meram who takes a couple of touches, looks up, and proceeds to fire a shot from 30 yards out. Someone forgot to tell Meram that shooting the ball from outside the box is not a forte of this Crew team. No one really cared though as the shot proceeded to fly past the defenders, past the goalie, and actually crossed over the line for the Crew's first goal in more minutes than I want to mention.

Once a ball by a Crew player actually went on target and broke the goal line, other players seemed to remember how this game of soccer is to be played. Milovan Mirosevic gets a cross in the box from Eddie Gaven and rips a volley ON TARGET that forces a save and a corner.

The scene is set. Nemanja Vukovic is taking a corner kick in front of the Nordecke. The kick is sent curling AWAY from the box to where a ready Sebastian Miranda is waiting. What everyone thought was going to be a send back into the box turned into what should be a goal of the year winner. From 20 yards out, Miranda heads the cross as hard as he can and beats a goal box full of players and a goalie for his first goal as a Crew player.

The Crew win the "Pioneer Cup". More importantly, the team manages to score, come from behind, and actually held on to win the game.

Here are some thoughts:

- Toni Tchani should be benched for one game. You play till the whistle blows. PERIOD. Then again, I am really not impressed with him as a winger. Tchani's defense is better than his offense, but he is liable to make stupid tackles that will get him booked. With Dilly Duka coming back, I see Tchani as being the first to hit the bench.

- As good as Justin Meram's goal was, as much I don't see him starting against San Jose especially with Olman Vargas now being available to play. I can see him coming in as a sub sooner rather than later though. 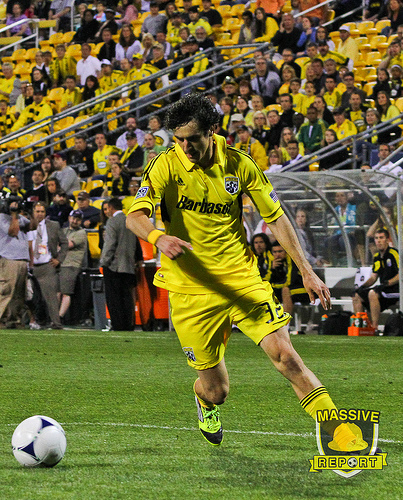 - Josh Williams and Eric Gehrig have been a fantastic tandem in the center of the defense. The fact is that they will probably go back to the bench once Chad Marshall, Julius James and Carlos Mendez recover from their injuries.

- Nemanja Vukovic (right) is confirming how I thought he would fit with this team back when I saw him in preseason. Vukovic may be the Miranda of 2012 with a better offensive touch. Is he the absolute answer at left back for the Crew? right now, yes.

- Players are starting to get healthy at a good time. There is a crunch of games coming up with San Jose, Seattle, Chicago and an US Open Cup all in a 10 day span. All hands need to be on deck. Good thing the reserve guys have seen a lot of action.

- FC Dallas midfielder Brek Shea was suspended for three games today by MLS for kicking the ball at the assistant referee at Saturday's game. Shea did not receive a booking for his action from the game's referee. That should say something about how inconsistent the officiating team was on Saturday.