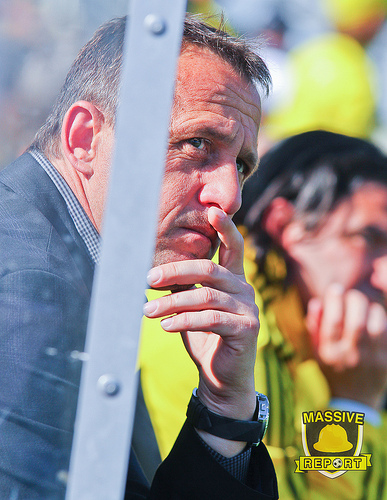 A game that had so much promise to show the true metal of this 2012 Columbus Crew squad. A team coming off a good looking home opener against the expansion Montreal Impact. A team that went on the road to Canada and pulled off a 1-0 win against Toronto FC despite having a penalty kick blocked and having to defend for a good portion of the game in a stadium where they were victorious only ONCE before, but never lost. So much promise and cautious optimism from Crew faithful. Heck, some were even giving head coach Robert Warzycha a little bit of credit for changing his go to 4-5-1 formation for a more aggressive and open 4-4-2 game plan.

Hit the jump now, but stay away from ladder, windows or cliffs please

Rabid fans can be so fickle sometimes. Well, okay, A LOT of times. One bad results and they are looking for someone to feather and tar with blame or responsibility. Unfortunately, being so angry from the bad result prevents the fans from truly being the 12th man and backing the team through thick and thin. Yes, there are some legitimate concerns that need to be addressed on the field, but it's awfully early in the season and we don't need to lose our marbles. Yet.

Here are some observations from Saturday:

The New York Red Bulls are a HOT HOT HOT team right now. This may have been the worst possible time to play this team. My personal pregame prediction was hoping for a tie, but I had a feeling the Crew would lose because of how hot the Red Bulls are. Thierry Henry is rejuvenated from his time with Arsenal and Kenny Cooper's playing level is elevated from playing next to him.

Saturday was not the Crew's day. PERIOD. The amount of chances that were close, the 1 on 1s that were blocked and the goal line saves from New York were a clear indicator. Yeah, sometime, it's just one of those days where there is a force field on the oppositions goal and Saturday was one of them. 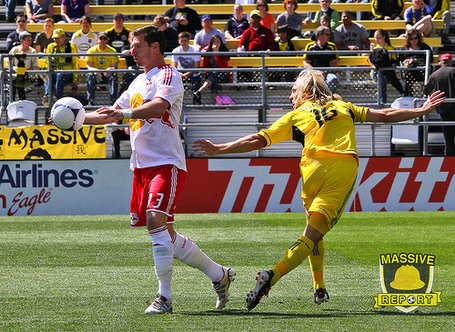 The result would have been different had New York not scored so quickly off the opening whistle. Eric Gehrig simply got beat by a bigger and better player. Not that Gehrig is bad, he was over matched and he does not yet poses the experience to compensate for a match-up that is not in his favor.

There are a lot of questions being thrown out there about Gaven (health and performance). Some of the "veteran" players are actually still trying to get used to the 4-4-2. Gaven made a few runs in the first half, but did not seem to be having his best day. Considering how steady Gaven usually plays, having a bad or sub-par game, is okay. Warzycha made the proper decision in subbing him out.

Dilly Duka looks to be back. Coming on a substitute in the second half, Duka provided a much stronger offensive spark on the left side than Anor did. Duka also played a good portion of the first half of the reserve game that followed, and seemed to be in good health and form. Expecting him to start in Philadelphia on Saturday would seem all but confirmed at this point. 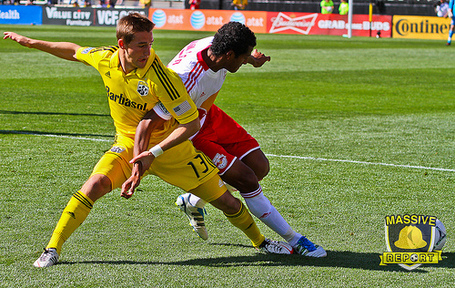 Ethan Finlay is playing like his shorts are on fire. It is evident that he wants to prove to the coaching staff that he should have been starting while Dilly Duka was injured as opposed to Anor. Finlay showed aggressiveness on the offense and defense. Though his 1v1 against New York goalie Ryan Meara was blocked, Finlay showed some of the speed and skills that made him the Crew's first pick in the 2012 Super Draft. It should not be a surprise if Finlay is first off the bench when subbing for Gaven or Duka.

Lest we forget, New York beat Colorado (the team the beat the Crew in the first game of 2012) by that same 4-1 score. Last year, the Crew lost it's opener 1-3 on the road to D.C. United, yet finished the season in the playoffs while DC faltered.

League play is a marathon, not a sprint. Teams that are hot now, may not be by summer or fall. Teams that are cold now, may make runs and win their conference. There is a time to hit the "panic" button, and that time is NOT NOW.

Agree? Disagree? Think I'm an eternal optimist? Like my photos? Hate my writing? Let us know what you think in the comments.