Share All sharing options for: Views From Field Level (Crew vs Houston Edition)

The Crew should have won this game 3-2. Go to 6:15 of the highlight video and then hit the jump.

I remember my first reaction to the starting lineup. "hmm, okay" I thought. Changing around the lineup didn't seem anything out of the ordinary. Seeing Danny O'Rourke in the lineup is a 50/50 chance almost every game, and so far this season, he played a full 90 or non at all. Houston is a good road team that is well organized, fairly settled in their way of play and personnel. The change in the lineup seemed to be a bit of "lets see if this works" and "hey, I wonder how they would do in a real game as opposed to practice". Putting a healthy O'Rourke in the defensive midfielder position was a no brainier. If he is healthy, that should ALWAYS be his spot on the field in my book. Crew head coach Robert Warzycha took his changes a bit further by changing 50% of his defensive line by adding Josh Willimas in place of Eric Gehrig and Nemanja Vukovic for Shaun Francis. The only change that made me wonder a bit was Toni Tchani playing the right wing as opposed to a central midfield position. The Crew's starting formation to start the game amounted to a 4-1-2-1-2. 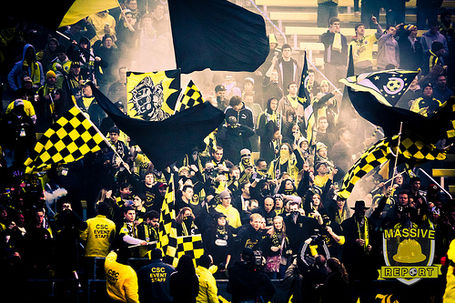 The Nordecke, kicked off the evening by a magnificent smoke and flag display reminiscent of the 2008 season. The team on the field responded by starting the game with pressure from all directions on the Dynamos and showing flashes of what this team can do when tapping some of their potential.

For the third straight game, the Crew give up the first goal. However, for the first time this year, the team ramps up its sense of urgency and goes after the opposing defense. The Crew score 2 goals against a fairly solid defense within a few minutes to take the lead. The celebration smoke had slightly dissipated when Houston equalized and the game ended in a 2-2 tie.

Here are some observations:

This is bound to show up in one of Matt Bernhardt's field analysis in the next few days. If you look at the left and right side of the field, you can see that the back, winger and forward played almost interchangeable roles. Both Emilio Renteria and Olman Vargas at some points were going wide and serving crosses while the wingers tucked in to play the attacking role. To a certain degree, Houston's was saved by the fact that many of the crosses were not of good quality, otherwise, we may have seen a much higher score line.

I was down on Josh Williams in the preseason. I did not see where he could be a good fit on this team, nor did I feel that he was playing that well. Williams manages to make me change my mind a little bit in yesterday's game. He played well in support of Chad Marshall and provided a more physical presence that Gehrig.

Vukovic, to me, has always seemed like he would be a good fit of this team and for Warzycha's playing style. He did not disappoint in his first start and should get a partial assist on Gaven's goal. Vukociv could have probably scored one himself, but he chose to pass the ball to Renteria who redirected it wide of the right post. Professional experience beats out raw talent sometimes and it showed. Warzycha's substituting Vukovic for Francis in the 80th minute was a head scratcher. Not sure why the coach would take out the player providing good crosses and shots on goal, for one that doesn't.

The tying goal by Houston falls squarely on Chad Marshall. Watching the replay, Marshall WATCHED that ball go across the goal mouth without even the slightest attempt at interfering with it's path. This has happened before, where Marshall stands flat footed and maybe "assumes" that someone else is covering this wandering ball. Sadly, it's usually a player from the other team that IS covering that wandering ball and promptly placing it in the Crew's net. Outside of that goal, Marshall had one of his better games since 2009.

Toni Tchani got a start. Out of position, but he finally got a start. Unfortunately, it would be hard to see him play his natural position with the likes of O'Rourke, a healthy Rich Balchan and Kirk Urso a head of him. Tchani's performance with the first team was better than with the reserves. The jury will still be out for a while on whether Tchani has a place with THIS team. When the Crew traded for Tchani there was a lot of possibilities for him to have an impact in the defensive mid position. However, with another solid draft class and off season signings, that window of possibilities closed and Tchani has not done enough to differentiate himself from the pack. 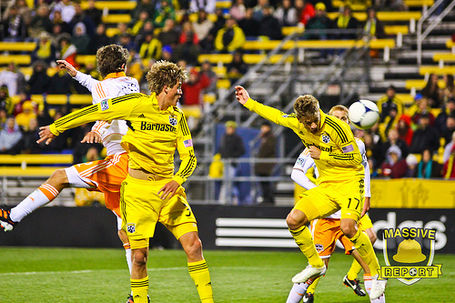 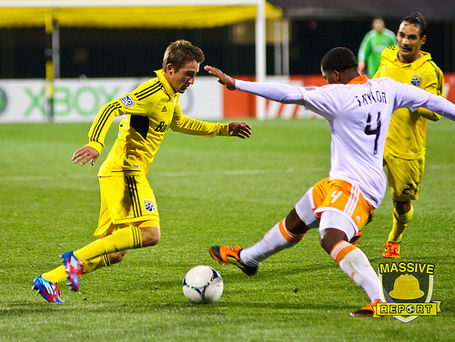 Aaron Schoenfeld and Ethan Finlay were fantastic as subs. They came in and provided some much needed energy against a tired Houston defense. However, had they come in a little earlier, they may have caused an even bigger impact. Schoenfeld has fantastic field vision in seeing Gaven coming forward and provided the most awkward assist off the chest. Finlay is a hustler on offense and defense. With Dilly Duka's hamstring still causing issues, it would not be a surprise to see Finley start at some point.

It seems that Warzycha played the personnel match-up game plan over keeping a steady lineup. It was a little bit of a gamble, but it worked. The team looked more dangerous and not as over matched against a fairly good team in Houston. Give credit where it's do, and he played this one right. The question becomes, should that be the mode of operation for the rest of the season, or should the Crew always field a consistent lineup?

What do you think of the teams performance? Do you feel that the team played with better urgency and fire?