A closer look at the Columbus flank play

Share All sharing options for: A closer look at the Columbus flank play

After five games of the 2012 season, and several years of watching the teams that Robert Warzycha sets out, there was an interesting moment this Saturday as I listened to the NBC Sports Network team. Several times it was noted that the Columbus midfielders needed to play wider, that they were tucking too far into the middle of the field. This, it was alleged, was going to force the outside backs to push forward if the team was to have any width in their attack.

As I heard these comments, and thought back over the Crew's recent history, I found myself getting mildly irritated. Not that this observation wasn't accurate. Instead, I grew frustrated because - from my understanding of Robert Warzycha's preferences - the team has been instructed to play precisely this way. It was almost as if the commentators hadn't noticed that this was not a new phenomenon.

More after the jump...

Now, this is not going to be a "bash the TV guys" piece - goodness knows that opinion is circulating around the Internet, and doesn't need my help to live a while longer. Instead, I want to offer up a few observations about how I see the Crew's formation put into practice.

I'd like to illustrate this point by turning to the MLS website's "chalkboard" feature. If you've ever poked around there, you know its a trove of analysis of individual players, their events, and many other goodies. While I can criticize it on some levels for being too reductive, too focused on documentation, I do particularly like their Heat Maps.

Heat maps, in this context, show where on the field each player appeared, and for how long. They're useful on their own, but in this case I wanted to construct a quick comparison of the Crew's flank players. What follows are five images, one for each game the Crew has played thus far. On each image are the four principal flank players: the two outside backs, and the two "outside" midfielders who played the most in that game.

Each of the below images comes from the MLS website

We'll start with the game in Colorado: 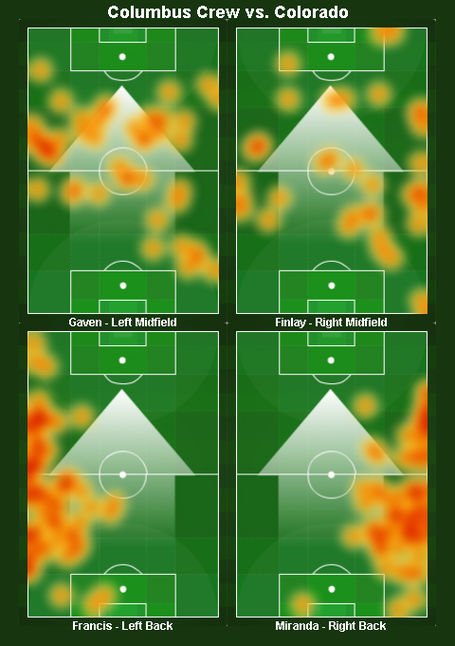 Now, when I showed Patrick Guldan an early draft of this article he rightly pointed out that the team was playing a slightly different formation for this game - but I believe the general observation still holds true. The Crew's two midfielders who were nominally on the flanks spent far less time there than the defenders behind them. Part of that also comes from the fact that Finlay and Gaven switched sides a few times during the course of the game - but even discounting that, the midfielders spent proportionally more time tucked into the center of the field, while Francis and Miranda each hugged the touch line more exclusively.

So, let's move on to the home game vs. Montreal: 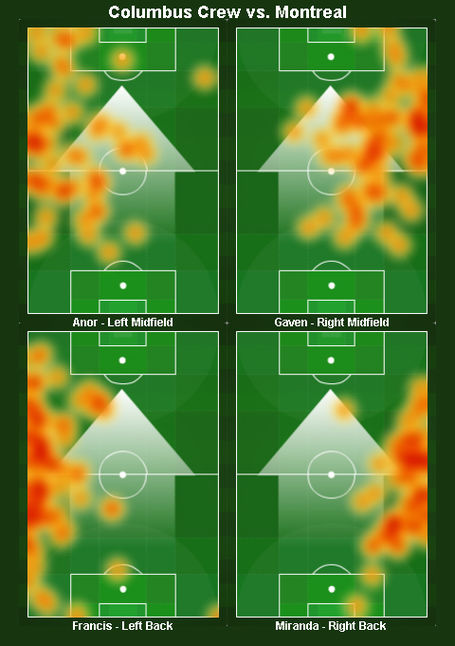 Here the same pattern appears again. While Miranda doesn't get as far forward as Gaven does, it is immediately apparent here that Gaven spent much more time in the center of the field than did Miranda - and likewise Anor came inside more than Francis did. I am surprised here that Gaven actually came inside more than Anor did - because I remember Anor being in the center far more. Perhaps it was because Anor left the flank at less opportune times, and so looked out of place more often.

Regardless, however, for a second game it was the outside backs, not the midfielders, who seem glued to the touch line. 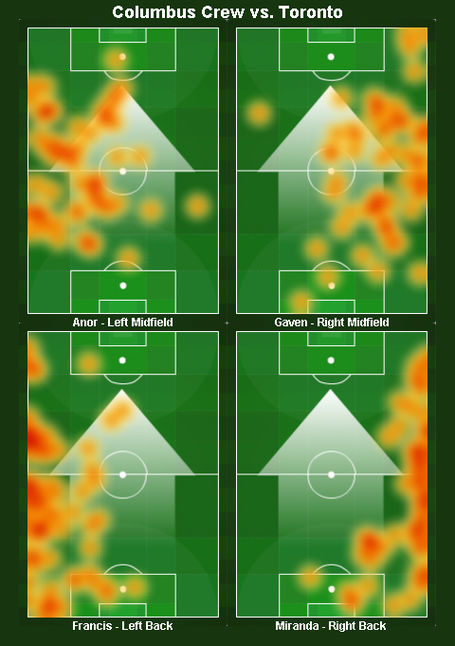 This may be the game that most clearly makes my point. You would expect Miranda to have finished the game with his right shoe covered in white chalk based on this heat map, while Gaven spent the majority of his time about ten yards farther inside. Anor and Francis show a somewhat similar pattern, although Francis does show a bit of a line up the left third of the field - perhaps sliding over as the Crew tried repeatedly to build up the right flank, pulling Gehrig, Marshall and Francis all over to cover. 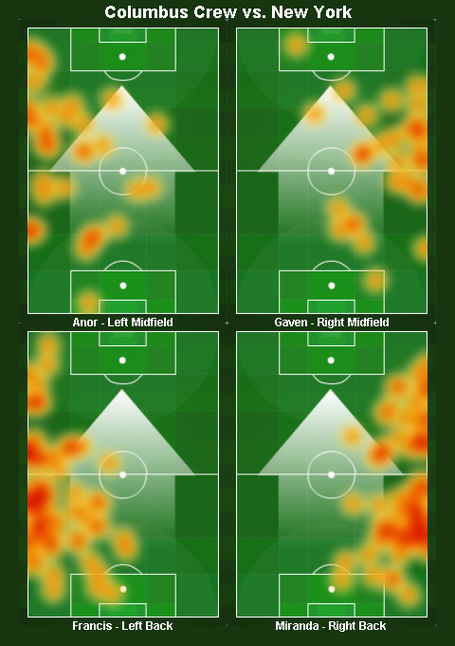 The New York game is a bit surprising, in that Gaven and Anor seem to made less of an impression in general terms. While Francis and Miranda both show larger sections of dark orange above, indicating where they spent a vast majority of their time, Anor and Gaven never seemd to stay in one place very long. Here you also see a greater portion of the defenders' time farther into the middle of the field - although their heaviest concentrations are still right along the sides. 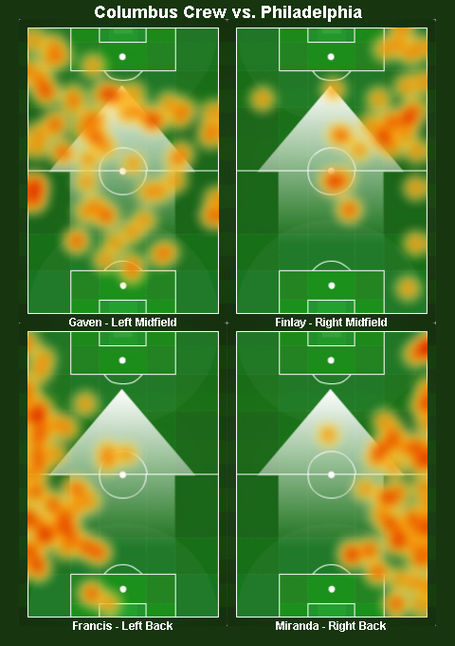 By this point, I hope my conclusions are pretty clear for everyone to see - so I won't belabor the point here. Regardless of whether you agree with this tactic or not, the Crew seem to have a pretty clear preference for using their defenders to provide width - even up into the opposing channels. The midfielders, on the other hand, are consistently playing closer to the middle of the field.

To some extent, making these observations leaves me with the impression that this team is just a few tweaks away from adopting the now-fashionable 4-3-3 formation that has been used by Colorado, Kansas City and even Toronto. With Miranda and Francis pushing up the wings, you could read the midfield as the triumvirate of Urso, Gaven and (insert other winger here). If Milovan Mirosevic can push forward into the attack more, he would then join the two outright forwards, giving everyone a few more short range passing options.

There are several dangers to this approach, of course - starting with the amount of strain this tactic would present for Kirk Urso to anchor the middle of the field. There is also the problem that, from his heat maps, Mirosevic appears to be pulling back close to the back line at times - pushing the team more into a squeezed 4-4-2 than a true 4-3-3.

Regardless of the implications, however, I'd love to hear your take on how the Crew's formation has been implemented. Do you agree that, under Warzycha, it has been the backs who get down the flanks more often?