FIVE DAYS. Five days are all that separates us from "First Kick". Five days separate us from the 2012 Crew Season. Five days till we see the Columbus Crew take the field for a "real" game. Five days that will pass by very fast for some, very slow to others, but never the proper pace for anyone. Five days till we get a look at yellow kits with a spanking new sponsor on the front and a few new names on the back looking to propel this team to glory. Five days till we get to start all over with our praises/complaints with regards to coaching, players, lineups, the FO, security, etc...

I'll go ahead and start on that last one. I'm not complaining or praising yet. I'm stating the obvious and adding some notes and speculations based on what I have seen in some practices, pre-season games and what has come out of camp so far. I'm also basing some of my speculations on the way I have watched this team play the past few seasons under Robert Warzycha.

Here is my starting lineup (should contain no surprises) 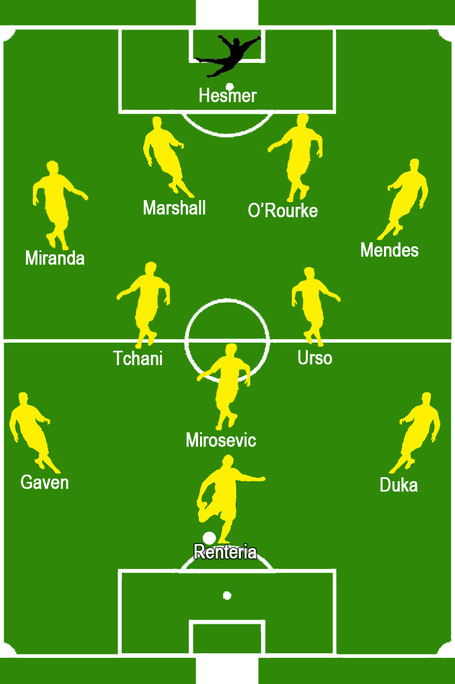 More details after the jump.

It looks very likely that Warzycha will start with a 4-5-1 formation, or what I feel will more precisely be 4-2-3-1. The only things we know for sure are Miranda and Marshall on defense, Mirosevic, Gaven and Duka in the middle and Renteria as the lone striker.

Here are the notes: