Share All sharing options for: Views From Field Level (Crew vs Impact Edition) 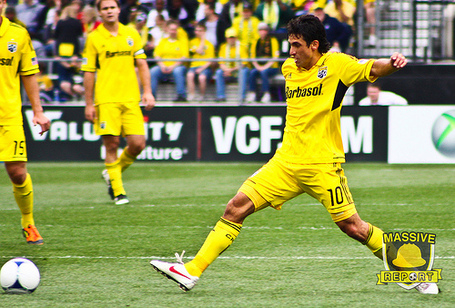 So, the "Crewsmas" related parties are now over. The first home game is under our collective belts and we finally get to see the fruits of off season Front Office moves live and in color. The excitement in the air before the game was THICK. Suits from the Crew Front Office, team ownership, Hunt Sports Group and even Barbasol were out and about at various supporter group tailgates. Crew general manager Mark McCullers was enjoying a bowl of tailgate chili at the Crew Union tailgate while talking with supporter about the new season. Games of Corn Hole and Beer Pong were about, but you could still tell that the excitement was not complete. In the back of everyone's mind sat the last time we saw the team play. Not a pretty memory. Yeah, it was the first game of the season and it was in a place where the team historically underperformed. CAUTION. You can even call it cautious optimism evident in our confidence poll that was down to 41% just 24 hours before game time.

So, how did the Crew look verses the expansion Montreal Impact? Well, You can read the game recap by our very own Aaron Katzeman to catch you up. Here are my thoughts.

Could the Crew possibly pick up all six points from those two games? If not, how may points would satisfy your fan heart? Do you think that Olman Vargas looks like a taller David Beckham?