Since I'm the only writer on staff that's actually ON the field level due to my photographic responsibilities, our editor Patrick Guldan, thought that my post titles should change to more accurately reflect where I stand. Literally. 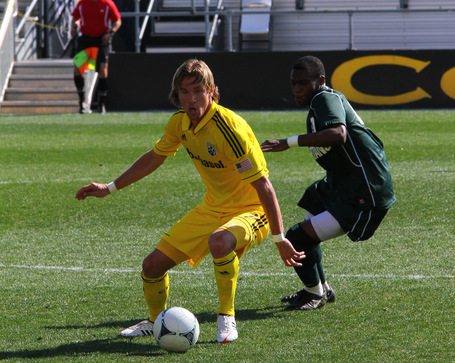 Saint Patrick's day 2012 was a bye week for the Crew. Major League Soccer for some random reason, thought that it would be appropriate to schedule a team for a two week vacation between their first game and their second one. The Crew Front Office and coaching staff took the opportunity to schedule scrimmages with college teams to keep the players sharp and game fit. After the team's performance in Colorado, the scrimmages proved to be the correct call to sharpen some of the dullness that showed against the Rapids.

This would be a good time to jump over the sideline boards.

So, here are my thoughts regarding the two scrimmages played today against Michigan State and University of West Virginia.

The "first team" took the field against Michigan State. Andy Gruenebaum was still the starter with the first squad and looked solid. William Hesmer played the second half and the first half of the second game before giving way for Matt Lampson to finish the keeper rotation and play the second half against West Virginia. Hesmer looked like Hesmer in directing the back like on where they go on set pieces and the goal scored on I place squarely on a defensive mental laps. 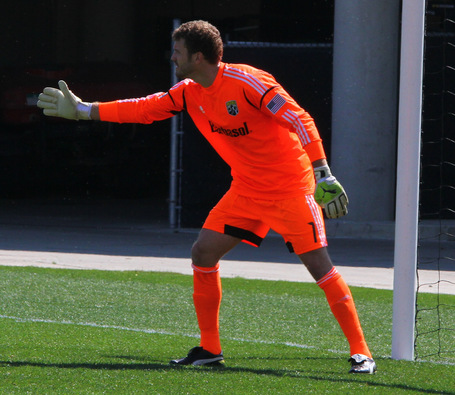 If you ever wondered what the 2012 Crew goalie kits looked like in real life, I call it "Hunting Orange"

This game also saw Eric Gehrig and Shawn Francis start with the first squad at center back and left back respectively. Gehrig had a good game and showed some good capabilities of recovering when making errant passes. I can see Gehrig getting starting time if our defenders keep falling like flies as has been their habit lately. Francis probably had the best game of preseason, yet, I'm starting to feel that he may not be able to fulfill coach Warzycha's offensive requirements. At this point, the defense is fairly thin and Francis is a good backup.

What do you know? The Crew played in a 4-4-2ish formation. The mid consisted of Ethan Finley, Milovan Mirosevic, Kirk Urso and Eddie Gaven. Milo was basically a 3rd forward and Urso played as the defensive mid. Olman Vargas and Emilio Renetria played as forwards. This formation/lineup looks almost ideal. Actually, It probably IS ideal for this group. When Renteria would get triple teamed as soon as he gets the ball, Vargas, Milo and Urso or even Miranda were close outlets. Vargas made it is mission to stay on the back post and he rewarded the 100ish fans with not one, but two fantastic goals. If Warzycha still had any doubts that Vargas was ready, today's performance should be taken care of them.

Milovan Mirosevic technically scored 3 goals from set pieces today, though on was called back because it was an indirect kick that was directly taken. All three shots were placed as follows, top left 90, top right 90 and low right post. As I watched him take the 2nd and 3rd shots, I can see that he had a rhythm and cadence as he took the kicks. This is a great indicator that he is finding/found his touch and made his adjustments to MLS's regulation game ball.

Kirk Urso was selected to start this game in the defensive midfielder role as opposed to Toni Tchani. I know that there are many people out there calling for Urso to never see the field again due to his Colorado performance. I beg to differ. First, EVERYONE had a terrible game in Colorado. Second, Urso was a supplemental draft pick. I have no idea how he slipped that far, but having seen him in multiple scrimmages and practices, he actually fits well with this team's playing style. What's even better, is that he is an offensive threat too. Urso's offense was on display today as he scored the Crew's fifth goal with a blast from about 25 yards out that beat Michigan State's keeper. Urso is a good player. The more playing time he gets, the bigger of an asset he will become.

By all means, the second game left a lot to be desired. As a matter of fact, you can look at my previous column and it's pretty much the same. The only difference was Aaron Horton scoring the lone goal and Matt Lampson keeping a clean sheet. The reserve group was much less sharp than the first team. The reserve league crown may not stay in Columbus this year.

Did you come out to the games today? what are your thoughts? Do you feel that they Crew are ready for the home opener?