On a rainy but mild Monday morning, the student athletes of the University of Notre Dame took on the mostly just-out-of-college athletes of the Columbus Crew reserves. The Crew starters are coming off of a listless and uninspired performance in Colorado just over 48 hours earlier. 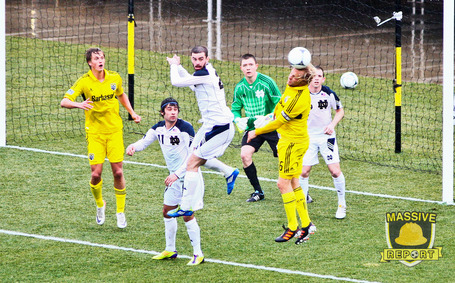 Several players on today's Crew squad were paying for positions in the depth chart. Some players were trying to see what they can do after recovering from various injuries. Others were just trying to secure one of the remaining 2 rosters spots remaining. The final score of today's game was 2-2, and even though it was an exhibition game against a college team, I had some thoughts and questions with regards to the overall team. These are personal observations and are not based on anything other than my team analysis. You may agree, you may think I'm an idiot, but at least we have some food for thought.

I am really hoping that coaching pride does not stand as an obstacle in front of this team's success. By all means, I have NEVER believed that a 4-5-1 or 4-4-1-1 was ever a comfortable formation for this team. For a group that has problems scoring, or even getting shots on goal for that matter, having a lone striker is probably not the answer. As I mentioned in a previous post, based on the types of skill players that I see, maybe we should look at a 4-1-2-1-2 (that translates to a diamond midfield and 2 forwards). I will claim no experience as a head coach, nor am I saying that I know better than the current one, but pushing a playing formation/style does not seem to be working and maybe there should be some serious consideration for a change in tactics.

The Crew played started the game in a 4-3-3 formation with Heinemann and Vargas out wide and trialist Schoenfeld as the middle striker. It seemed that that formation basically made the wide forwards as midfielders trying to cross the ball in. Through the game, the team went to a more traditional 4-4-2 format and then the standard 4-5-1 format. Overall, 4-3-3 created pressure on the opposing defense, but didn't lead to scoring. 4-4-2 actually seemed to lead to both goals by Vargas. 4-5-1 gave the wingers more action, but by the time crosses were sent in, there were no yellow kits in proper positions to take advantage.

I don't think the Mirosevic's full potential as a field general is going to be reached with him playing as the withdrawn forward. Emilio Renteria is not the type of forward that can hold on to the ball with his back or side to the net and wait for help. Renteria is a bulldozer that is skilled in going forward and taking shots on goal. He can also play wide if needed to feed crosses in the box. Scaring the crap out of the opposing goal keeper is just a bonus.

Vargas played the full 90 minutes in today's exhibition. Though coach Warzycha does not seem to be in any hurry to put him into a real game. I would be interested to see if Vargas ends up playing with the "first" squad in one of Saturday's exhibition games.

Matt Lampson played in goal today and was not tested very much. The two goals scored on him I place squarely on the defense.

Did the Crew play an awful game on Saturday? YES. I'm I ready to freak out and abandon my 1st or 2nd place finish in the East prediction? NOPE.

Mental lapses at inopportune times is starting to become a trademark on this team. THAT is not a good sign. When you can see that mental laps coming, that is even worse.

I'm really looking forward to the double header on Saturday because they will really show if this team has changed it's ways or if it's going to be the same of what we saw the last two years just with a couple of new players. Make sure to keep an eye on the Massive Report feed as we will have photos, interviews and even more in depth analysis from Patrick Guldan.

If YOU were the head coach and you had this roster to work with, what would be YOUR tactical vision?