Share All sharing options for: Fox Sports Ohio Deal Near?

The deal between the Columbus Crew and Fox Sports Ohio appears to be heading to completion. Further proof was found on the team's own website as FSO was named as the Crew's TV partner in a sponsorship and donation request page for thier Kicks For Kids program. Within 5 minutes of discovery, the team removed any mention of Fox Sports Ohio. A screen shot of the original is below. 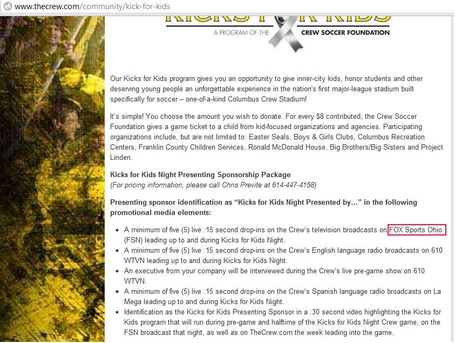 Several sources close to negotiations have said that the team is in talks with Fox Sports Ohio to become the broadcast partner of the team, broadcasting the entire slate of Crew games in high-definition The Crew's contract with Ohio News Network expired at the end of 2011 and the team hasn't announced a new partner.

This mixup, inadvertantly, raises the profile for the Crew's Kicks for Kids program. The team's non-profit, the Crew Soccer Foundation donates tickets to deserving young people to enjoy a game at Crew Stadium. An 8 dollar donation equals one ticket for the program.

You can donate to the program here: http://www.thecrew.com/community/kick-for-kids