Share All sharing options for: Massive turnover heading into 2012?

With the 2012 Columbus Crew roster starting to take shape, I found myself thinking back over all the players that have left the team in the last year. Key contributors like Emmanuel Ekpo, Robbie Rogers, and Andres Mendoza are no longer in Columbus. Some left voluntarily, while others were traded or simply not re-signed.

Taken as a group, however, I started to wonder how much turnover there really has been, and how it stacks up to previous seasons. So I started digging - and was a bit surprised (more after the jump).

Over the last 12 months, 11 players* have left the Crew's roster. Some, such as Leandre Griffit, are barely a footnote in the annals of the team. Others, however, are far more notable. The full list is currently:

These 11 players appeared for a total of 13,414 minutes last season. The biggest contributors were Robbie Rogers, Emmanuel Ekpo, Andres Mendoza and Josh Gardner - each of whom played more than 2,000 minutes in all competitions. This is a significant portion of the team, particularly along the left flank where both Gardner and Rogers were frequent contributors.

But this is nothing, I hear you thinking. This doesn't compare to last offseason, when we lost Schelotto, Carroll, Hejduk, and all those others!

True - in terms of emotional impact the effects of last season's departures dwarf what the team has gone through this year. In fact, from many of the comments I have heard friends and fellow fans make, this year's turnover seems very welcome indeed. Yet in some ways these two offseasons are not so different.

In each of the last two offseasons, the team has chosen not to re-sign its leading scorer (Schelotto and Mendoza). Gone, too, is the holding midfielder (Carroll and Ekpo). Each year's departing group is even the same size - 11 players. 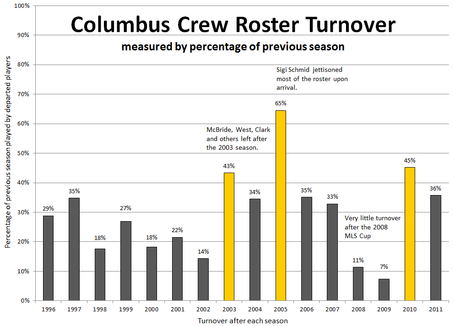 To help put everything in context, I compiled the chart visible to the right. It lists each season's departures in terms of the percentage of the previous season lost. For example, after the inaugural season a total of 13 players did not return the next year. Those 13 players had played 9,892 minutes during 1996, representing 29% of the available playing time. The next year, only 12 players departed the team - but those dozen players had seen more action, having played 35% of the season (a big piece of this was the sale of Brad Friedel to Liverpool).

Scanning the data, the average offseason sees about 30% of the team not return each year. The biggest year, obviously, was the 2005-06 offseason as Sigi Schmid joined the team and immediately gutted the roster - effectively making the team an expansion club. Two other seasons saw significant rebuilding: 2003 and 2010. 2010 is a well-known story, and we are not yet so far removed to revisit it with any new insight. The 2003 restructuring encompassed several high-profile players retiring (Mike Clark) or moving overseas (Brian McBride, Brian West) as well as a host of role players (Chard McCarty, Brian Dunseth) moving on.

At the other end of the scale, several years saw very little change in the roster. Predictably, the years after the club's triumph in MLS Cup (2008 and 2009) saw very little change to what was a successful group. More interestingly, there were also periods of little change around the turn of the century - with less than 20% of the team leaving after 1998, 2000, and 2002.

So where does that leave this year's Crew, or its fanbase? There are significant opportunities for the incoming group of players to make their mark. Two international players have already joined the fold in Olman Vargas and Milovan Mirosevic, and rumors of a new Designated Player continue to percolate. Draft picks and homegrown players such as Ethan Finley and Ben Speas will also have opportunities.

These opportunities, however, will come with a challenge. The style and culture of the team is in flux - so each newcomer will not simply be looking to replace his predecessor but also contribute to the new style envisioned by Warzycha, Bliss and the coaching staff.

Two years of greater-than-average turnover have left the team still in search of a lasting identity, and it will be the task of each player on the roster to help construct it.

* Some players, such as Ben Sippola, Alex Riggs, and Andy Adlard, were released without appearing in an official game. For the purposes of this analysis, however, we are ignoring their existence.