While some of these players may be injured for First Kick, this is the lineup that I believe will start the majority of the Columbus Crew’s games this year (barring injuries):

With this starting XI and seven substitutes, Columbus will have every area of the field covered. Gruenebaum is the backup goalie. Mendes and Balchan can fill in anywhere across the back four. Balchan can also play in the center of midfield, along with Tchani. Anor, Speas, and Meram can all play on the wings, while Speas and Meram can also fill in at striker.

My reasoning behind leaving Tom Heinemann out of the game-day roster is because Renteria and Vargas are both big, target forwards. If Coach Warzycha was to make a sub at that position, he would most likely want a speedy player like a Meram or a Speas to attack the opposing defense.

The starting lineup listed above is easily one of the best in the league. Hesmer is a solid keeper. Francis is the only shaky defender, but his speed and overlapping ability are very good. Hopefully he is fully recovered from the injury that cost him most of his 2011 season. If he is healthy, this should also finally be Danny O’Rourke’s year. He is a veteran with the grit and determination to be able to play by himself in the holding midfielder position. The five attacking players (Eddie Gaven, Milovan Mirosevic, Dilly Duka, Emilio Renteria, and Olman Vargas) scare me thinking about how deadly they could be.

I want Warzycha to play an attacking formation this year. Enough with one striker and a withdrawn forward. The Crew need to go for the kill early and often in 2012. Imagine O’Rourke winning the ball in midfield and playing it forward to Mirosevic, who then distributes it to the wings. Mirosevic, Renteria, and Vargas all charge into the box to get on the end of a cross, and the play finishes with the ball in the back of the net.

Gaven is a great two-way midfielder, and, hopefully, Mirosevic doesn’t mind getting back to help out the defense every once in a while. Nevertheless, I have complete faith in O’Rourke being able to man the middle of the field by himself.

Warzycha has said numerous times that Columbus is in talks with with players who could possibly be Designated Player material. I’m hopeful, but I won’t believe it until I see it. As it is, I think the Crew have a great chance to add to their trophy case in 2012. 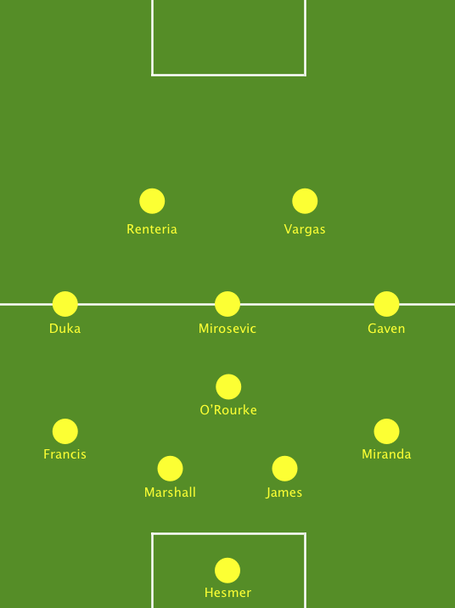